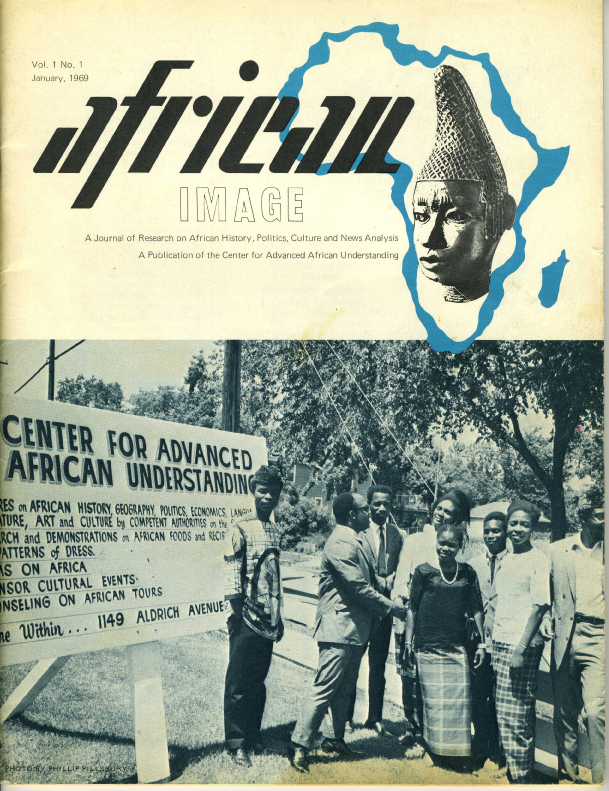 “I reject the view which regards African history as the story of European adventures.” With these words by University of Minnesota student Daniel Ajah Okoronkwo, the Center for Advanced AfricanUnderstanding (CAAU) was born in Minneapolis in June 1968.

It was the height of the Civil Rights Movement in America. Martin Luther King, Jr. had recently been assassinated. African and African American history was widely ignored in American high schools and universities. Africa was seen by many as a land of “tribal fetishes and cannibalism.” An African student riding the bus to Dinkytown was often subjected to inquisitive stares and questioning by European Americans.

Okoronkwo, a political science student from Nigeria, was determined that the African students at the University of Minnesota would bridge this cultural gap through CAAU. The center’s monthly magazine, the African Image, would be their mouthpiece.

The students placed a huge wooden sign in front of CAAU headquarters at 1149 Aldrich Avenue welcoming Minnesotans to inquire within for lectures on African history and culture. Andre Gombako, an agricultural student from the Central African Republic, provided the public with recipes for African dishes such as “Jollof Rice” and beverages such as “African Banana Drink.”

CAAU staff offered demonstrations of African art and dress, with the aim of encouraging entrepreneurship in these areas. According to Okoronkwo, “The availability and use of African dresses may remove the [stigma] often associated with wearing them in America.“

CAAU promoted scholarly research. In the January 1969 issue of African Image, Okoronkwo provided a historical analysis of the Nigerian/Biafra crisis, as well as the 1968 coup that overthrew Mali’s first president, Modibo Keita.

Joachim Banda, a biophysics student from Zambia, wrote an article on the African social system and its communal focus. Banda described the African extended-family value system, as well as the traditional perspective that it was a privilege, not a burden, to care for one’s elders.
Banda wrote, “An African is, in most instances, horrified on the first occasion of his acquaintance with the Western phenomenon of old people’s homes.”

Okoronkwo, president of CAAU and author of the high school text The New Periscope on Africa, spoke on African political systems and pan-Africanism. CAAU staff supplemented their lectures by providing participants with recommended reading lists of African studies publications.

CAAU received immediate attention from local leaders in Minneapolis. CAAU’s board of directors included Cecil Newman, editor and publisher of the Minneapolis Spokesman and St. Paul Recorder, as well as Harry Davis, director of the Minneapolis Urban Coalition. Congressman Don Fraser attended the June 21, 1968 dedication of CAAU. Fraser spoke about his 1967 trip to several African countries, the system of apartheid in South Africa and Rhodesia, and the need to foster greater understanding of Africa.

Black power activist Stokely Carmichel and his wife, South African singing legend Miriam Makeba, met with CAAU founder Okoronkwo to further the cause of CAAU. Various Peace Corps officers, such as C. Payne Lucas, director of the African Region, visited the facilities of CAAU.
Although the CAAU had ambitious goals, the nonprofit educational organization was short-lived. Financial support for CAAU was limited. CAAU members were unpaid volunteers, and they soon graduated from the University of Minnesota and pursued their careers.

Amos Odenyo, the senior editor of African Image, assisted in the creation of the Department of Afro-American Studies in the University of Minnesota in 1969. He taught Kiswahili in this department until 1971, at which time he moved to New York, where he became chairman of social sciences at York College, City University of New York.

CAAU’s founder, Daniel Ajah Okoronkwo, moved to California after obtaining a B.A. in political science from the University of Minnesota and completing three years of studies towards a law degree at Hamline University School of Law. Okoronkwo continues to be an author and is involved in entrepreneurial activities.

The spirit of volunteerism and interest in African studies expressed by members of CAAU has survived within the current student population of the University of Minnesota. The university now offers numerous African studies courses of the type once promoted by a group of long-ago forgotten African students in the late 1960s.

African students no longer meet on Aldrich Avenue, but they hold African-related events organized through internet blogs and Facebook. The African American and African Studies (AAAS) Department at the University of Minnesota celebrated its 40th anniversary in 2009.

Additional information on the Center for Advanced African Understanding (CAAU) is available at http://nyanzasun.com/african-image.html.