Survey finds all communities of color victimized by fraud

Every year, scammers make hundreds of millions of dollars by selling fake services and worthless products to the American public. A recent news conference in Minneapolis brought attention to the particular risks these scams pose to African Americans and other communities of color.

In April, New America Media reported that consumer fraud is an under-reported crime. In 2016, Americans lost $774 million to consumer fraud: “…the exact revenue amount lost by ethnic communities is not known,” wrote Khalil Abdullah in his April 25 report.

Lately, citizens are getting calls supposedly from the Internal Revenue Service (IRS) claiming they owe back taxes and that they are about to be sued or arrested unless they pay right away. The caller instructs the person to put money on a prepaid debit card and then provide the card number over the phone. This is not in fact the IRS; they don’t ask for credit card information this way. Official IRS communication about unpaid taxes is conducted by mail.

“All of us are targeted” by impostor scams, said Assistant Director Jennifer Leach of the Federal Trade Commission (FTC) Consumer and Business Education Division on May 25 in downtown Minneapolis. Leach, Williams, law enforcement representatives and others spoke to invited ethnic and other media, including the MSR, about how to better inform people to protect themselves from scams.

The nearly two-hour discussion was moderated by Executive Director Sandy Close of New America Media. “So many people across the spectrum are hit by some sort of scam,” said Close. “This is a problem that we can only address with information.”

According to the 2011 FTC Consumer Fraud Survey findings, 17 frauds were surveyed. The top frauds included weight-loss products, prize promotions, unauthorized billing for club memberships, Internet services, and work-at-home programs. Consumers between the ages of 55 and 74 have the greatest chance of being victimized by fraudulent prize promotions. Those under age 45 are less likely to be such victims.

He added that Blacks are also less likely to report any type of fraud. Embarrassment or guilt is often the reason for non-reporting, said Director Lisa Jemtrud of the Better Business Bureau of Minnesota and North Dakota Foundation. Fraud schemes too often “tear apart families completely.”

“Fear is a huge motivation” used by scammers, said Jemtrud. Scam artists are professionals. “They are excellent in the fine art of distraction,” she pointed out.

Chief Deputy Director Kazoua Kong Thao of the Hmong American Partnership noted that seniors in her community are especially susceptible to scams, and if victimized are embarrassed to report it. “It is very shaming.”

“We need to hear from the community to enforce action” against scam artists, stated Minnesota Assistant Attorney General Jason Pleggenkuhle.

“A lot of telemarketers disregard the Do Not Call list,” noted Kossow. “I get a lot of [telemarketing] calls all the time on my cell phone. I’m sure a lot of people do.”

Kossow said a lot of people believe seniors are the more likely victims of scams. “Our fraud surveys have shown that seniors have experienced [scams], but they are less likely to be victimized than some other groups. But there are particular types of fraud that do target seniors.”

Tech support fraud schemes are one example Kossow went on to describe. “They started a few years ago with consumers getting a telephone call. The caller reported that they are from Microsoft. [They] can fix the person’s computer “if [they will be paid] a couple of hundred of dollars to remotely clean up their computer.” 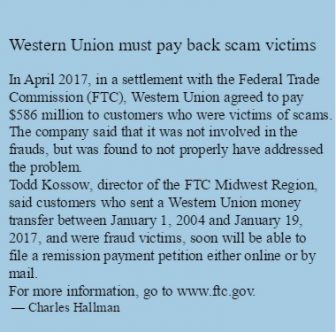 Now such scams come in the form of pop-up messages on your computer, said Kossow. “It will look like it is from Microsoft, Apple, or some computer operating system.” You are directed to call an 800 number. “They try to scare you that you need to call and get it fixed right away. Those scams, we’ve found, disproportionately affect seniors who or are more likely to fall victim.”

Scams won’t completely go away, Kossow advised. “The first thing to do is register your phone number on the Do Not Call register. Any telemarketer who calls your number…is a scam artist. Just ignore the call.

“If you get some sort of pitch on-line or on the phone, scammers always want you to act [quickly]. Slow down… Any emergency they are [claiming] is a fake emergency. Talk to people, talk to friends and family about it… Just the process of talking it through can help people realize that this doesn’t sound quite right.

“Do not wire money to somebody you don’t know. The most common payment for scam is money transfer through companies like MoneyGram and Western Union. If you have been a victim of a scam, even if you’ve just gotten a telephone call and you didn’t fall victim, report that to the FTC,” stated Kossow.

“What we are trying to do,” said Kossow, “is reach out to various racial and ethnic communities that are more likely to be fraud victims and get the message out that fraud is out there and what they can do to protect themselves. The people in those communities don’t necessarily report fraud at the same level as other victims.”