Taking a short break from packing for her upcoming trip to her hometown, soprano Brittany Renee Robinson spoke to the Minnesota Spokesman-Recorder about what attendees can expect from her appearance at Faith Tabernacle Gospel Fellowship’s (FTGF) 30th anniversary concert.

The New York City transplant explains that performing at her mother Yvonne’s church was planned for some time. “It’s always been in discussion, as far as coming back and doing another concert because it’s been awhile,” says Robinson about the upcoming show.

The celebrated opera singer will return to Minneapolis to help FTGF celebrate its anniversary by giving a two-hour benefit concert on October 19. 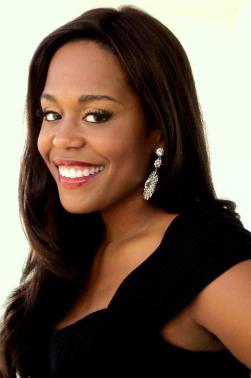 Robinson will be performing spirituals and secular music, but says she also wanted to use the opportunity to introduce the uninitiated to opera music. “A lot of people who are coming do not know about the operas and arias and everything that goes into it. So, I will be doing some of opera’s greatest hits, as well as some spirituals and some jazz.”

Robinson credits her jazz-loving father with stoking her interest in music as a young girl. “My dad always loved music and my mom did as well, and one of my aunts played the drums. It’s always been in the family and I have sang in the choir in middle school and high school.”

Ambitious and perhaps something of a perfectionist, Robinson also began taking voice lessons at the time to, as she explains, “get the better solos in choir.”

She saw her first opera performance, the Italian opera Don Giovanni, at about the age of thirteen when her choir teacher invited her to a performance. “My mom was with me and I turned to my mom and said, ‘I like this; this is something I want to pursue! This is something that I really enjoy watching.’”

Opera, though, didn’t seriously enter her life until she became a student at the renowned Peabody Conservatory at Johns Hopkins University, where she obtained both her undergraduate as well as her graduate degrees. “I realized how much I loved the art [and] how much I loved to actually perform… I wanted to share my gift with others.

“And so I really loved to sing. I really enjoyed this talent that was given to me and my parents just told me to do what I love to do. ‘Don’t get stuck doing something you don’t love.’”

Though there aren’t many Black opera singers overall, people would perhaps be surprised at how many African Americans have had successful careers as opera singers and are continuing to break down doors.

African American opera singer Angel Blue is currently playing the coveted role of Mimi in Puccini’s La Boheme. It is one of the most heralded of all operas, and Blue is performing it this month at one of the most highly esteemed opera venues in the world, The Metropolitan Opera in New York City.

Robinson explains that opera isn’t just about singing but demands quite a bit of acting training as well. “You have to be able to portray the story through your voice as well as your actions.” She reveals that her dream roles are “Violetta in La Traviata. I am working on that this season and getting that in my repertoire this year. Another one would be Lucia from Donizetti’s Lucia Di Lammermoor.”

Robinson, who works as a staff singer at the historic Abyssinian Baptist Church when she isn’t traveling and performing opera, says, “People always ask if [I just perform] opera and I’m like no, I still have a love for jazz and musical theater and early music [music composed prior to the Classical era] and art songs because that’s what I grew up on.”

The songs selected for the Oct. 19 performance will reflect Robinson’s broad taste in music. It will include an array of songs from opera, gospel, and jazz such as Quando Men Vo from Puccini’s La Boheme, Ach Ich Fuhl’s from Mozart’s The Magic Flute, and Sempre Libera from Verdi’s La Traviata.

She will also perform The Spiritual Cantata by John Carter that she explains has “five sections of well-known spirituals which includes Sometimes I Feel like a Motherless Child and Let Us Break Bread Together.”

On the jazz musical theater front, she will perform selections from Gershwin’s timeless musical Porgy and Bess, including Summertime and I Love You, Porgy. There will also be some Duke Ellington she says “to tie it all together.”