Oprah Winfrey’s affection for the Twin Cities runs deep. Citing “The Mary Tyler Moore Show” as one of her greatest influences, Winfrey, who once famously reenacted the sitcom’s intro during the height of her own talk show, made her love for the area known as she graced the stage of the Xcel Energy Center before a sold-out crowd of more than 15,000 during the second stop of her 2020 Vision Tour.

Embarking on a nine-city tour that includes stops in Atlanta, Denver, and Los Angeles, St. Paul was given top billing as Winfrey expressed appreciation for a state she once considered relocating to. Entering the stage to the sounds of Prince’s “Let’s Go Crazy,” Winfrey greeted the ecstatic crowd with the hospitable presence that has made her a global icon.

Ever the gracious host, Winfrey provided each member of the audience with a personalized gift bag complete with a workbook, snacks and an assortment of personal care items. Attendees were also welcomed to a concourse full of activities and photo opportunities upon their entrance into the arena.

Partnering with WW, formerly Weight Watchers, Winfrey’s 2020 Vision presented a full day of wellness, which called for the capacity crowd to engage in a series of physical and mental exercises throughout the six-hour event. Many of the workbook exercises were led by Winfrey, who interacted with the audience as she walked the arena’s floor to the delight of those around her.

“2020 is the year of purpose and it’s important to lead a life of intention,” Winfrey proclaimed setting the foundation for the event’s corresponding speakers, activities, and exercises. Joining the icon for the day-long affair were a collection of speakers and wellness specialists including Jesse Israel, Angela Manuel Davis, Julianne Hough, Mindy Grossman, and local WW coach, Jessica Goldade.

Award-winning actress, writer, and producer, Tina Fey, was the afternoon’s celebrity headliner who joined Winfrey for a sit-down conversation that covered parenthood, work-life balance, friendship, and their mutual appreciation for Mary Tyler Moore. Fey, like Winfrey, also counts Mary Tyler Moore as one of her biggest inspirations. The two expressed their admiration for the late ’70s sitcom star by visiting the Downtown Minneapolis statue a day before Saturday’s event.

Financial expert, Suze Orman and media personality, Tamron Hall were among the notable guests in attendance as both were full participants in Winfrey’s workbook activities.

Winfrey also allocated time throughout the day to revisit many clips from her talk show, taking the audience down memory lane with memorable moments from her storied career.

Saturday’s day-long event concluded with an inspirational closing by Winfrey, who spoke to the importance of strength when facing adversity.

“Everything that has happened to you has made you exactly who you are right now, and you are still here. Every time a challenge came and looked you in the face and tried to tell you you weren’t who you know you are, you were building strength. And strength times strength equals power…”

Gauging the crowd’s ovation, attendees appeared to be very receptive to her message. 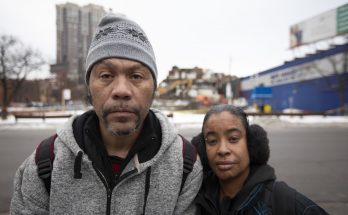 Marquis Taylor is a contributing writer at the Minnesota Spokesman-Recorder. He welcomes reader responses at mtaylor@spokesman-recorder.com.

View all posts by Marquis Taylor →